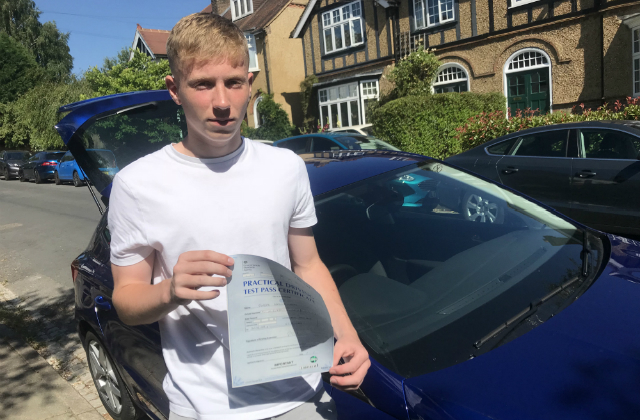 This week marks 6 months since the rules changed in June 2018 to allow learner drivers to practise driving on the motorway with a driving instructor.

A recent study we carried out showed that a lack of motorway experience was the main reason newly qualified drivers didn’t feel prepared for driving independently.

The changes help give learner drivers the opportunity to get a broader driving experience before taking their driving test and improve their confidence driving on the motorway unsupervised.

Since June, it’s been great to hear positive feedback from you and your pupils letting us know they’ve found having the opportunity to practise with an instructor really useful.

In this blog post, guest author Finbar King tells us a bit about his experience driving on the motorway for the first time. Finbar is AA president Edmund King’s son.

Being one of the first learners to drive on the motorway

With the new rules coming into force at midnight on 4 June, my dad and driving instructor Mark hatched a plan that involved me driving onto the M25 at seconds past midnight - how exciting!

The countdown to midnight

To start with, we did a couple of practice runs up to the large roundabout next to the M25 which we timed. Then, at a couple of minutes to midnight, I set off in my instructor’s car with my dad in the back filming.

We decided that depending on the timing I would either do one or two laps of the roundabout while waiting for it to turn midnight. As it happened, one was enough and off I drove to join the M25 seconds after midnight.

How I found my first motorway drive

As it was only a few minutes past midnight, it wasn’t too busy as I joined the motorway. I’d driven on quite a few dual carriageways before so I wasn’t too nervous about joining the fast-moving traffic. I felt like this helped really prepare me for motorway driving.

My first drive went really well, although my instructor did have to tell me to slow down as my speed began creeping up at one point. My dad then sent some of the coverage to a journalist and pretty soon the whole video and photos appeared on the This is Money website, which was pretty surreal.

Following the success of my first motorway drive in the early hours of the morning, we met a film crew from ITV’s Good Morning Britain who wanted to film me live on the motorway. They set up cameras on the windscreen and the reporter squeezed in the back. I was glad that my dad told them not to interview me while driving, as it was quite a nerve-wracking experience!

This time it was M25 rush-hour with many more trucks and cars - the normal heavy Monday morning traffic! I felt I did OK, but I’m glad I’d experienced the drive with just my instructor first.

Some of my schoolmates told me later that the presenter Piers Morgan had said I looked scared and this was an accident waiting to happen. But what does he know?

My instructor Mark definitely made sure I had enough practice before we even thought about driving on the motorway.

I think the change in the rules for learner drivers is a really good idea and I think that every learner should have at least one motorway lesson before driving on the motorway unsupervised.